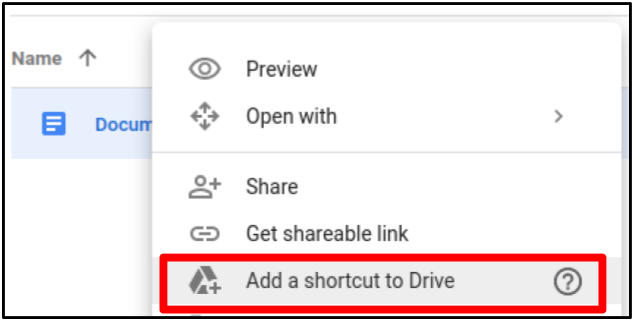 It’s been a couple of weeks since Google turned on Drive’s file shortcuts. Until then, Google had a little hidden the possibility of having the same file in two or more different folders. I say something hidden so that it wouldn’t appear in any menu, it could only be achieved with a combination of keys or dragging with the mouse and pressing a key at the same time.

Like everything else, those of us who were used to it seemed a good choice. So in a personal folder you could have a file and, at the same time, have it in a shared folder. As it was really the same file, wherever you entered it was always the latest version of the document.

It’s true that it was a little known option and therefore not very used. Now Google has removed it and changed it to shortcuts. Like all changes, I don’t like it that way, but since there is no going back, you will have to get used to it and learn how it works.

The idea is very simple. Inside Drive, we can click with the right button of the mouse and the option to create a Shortcut will appear.

You will be given the option to choose which folder you want to place it in. And here comes the first news. If it is placed in a shared folder a message appears warning that only the owner of the folder can delete the shortcut. And that’s it.

If the shortcut is placed in a shared folder, even if there are several people with editing permission in the folder, only the owner of the folder where it is placed can delete the shortcut.

This may lead to some kind of strange situation. An editor for one folder places a shortcut to a file in another folder. He realizes that it was a mistake, but he can’t delete it, since only the owner of the folder can delete it.

The shortcut that is created has the same name as the original document. And here comes the second new feature. If the original file is renamed, the name of the shortcut does not change. This may cause some confusion.

And the third novelty. The shortcuts don’t change the permissions of the original file. What does this mean? That if we put the shortcut in a folder that has several readers and editors, if in the original file we haven’t given them permission, they won’t be able to open the file.

In fact, in the folder they will see the access as follows.

And if they request access, the owner will receive the typical permission message. For me, this is the worst of the three novelties, since it forces us to check who has access to the folder where we want to put the direct access and add permissions to the original file.

In any case, that’s how it works and you have to get used to it. It is true that conceptually it is easier to understand than having a file in two folders, since other systems already use shortcuts.